this week in our kitchen: risotto + farro

As I’ve mentioned a few times in previous posts, our recently household adopted a practice of trying a few new recipes each week. Not only does this support our goal of eating out less frequently, but is also a fun activity for us to complete together — both the recipe choosing and the cooking. (Bonus points for reduced dollars spent on food and healthier eating. Extra bonus points because instead of eating at my work cafe daily, I’ve now cut down to a few times a month due to leftovers!)

Each time I mention to friends or family members what we’ve been doing, what always follows is a request for the recipes. And while, in my wildest dreams, I never imagined recipes being a staple on this blog, I’ve decided to share here as a means to answer the aforementioned requests, as well as (selfishly) see if others would be willing to also share their favorite recipes with me. For some reason, my fiance refuses to make the same recipe twice (not complaining because he’s seriously the best), so it’s going to take a village — or many internet searches — to meet our demand of new recipes to try each week.

We discovered this recipe in our newest Instant Pot cookbook (a device with which, admittedly, we’re a bit obsessed) and just made a few minor adjustments, including changing out the ham for chicken sausage — because we already had the latter in the freezer. This was our second time making risotto in the Instant Pot® and both have turned out amazingly yummy.

Add salt, pepper, broth, corn and ham (or sausage).
Secure the lid on the pot.
Close the pressure-release valve.

Select manual and cook at high pressure for 8 minutes.
When cooking is complete, use quick release to depressurize.

Stir the risotto until any surface liquid disappears, then stir in cheese.
Let stand 10 minutes before serving.
Garnish each serving with dill.

We went a bit off the rails with this recipe from the latest issue of Real Simple — but not entirely on purpose. Our first substitution was Kobacha squash in place of the butternut (because, you guessed it, we already had it). We also used the entire squash, which equated to much more than the four cups for which the recipe called. The next alteration was mistaken and proves that one of us wasn’t paying attention to the recipe and/or the grocery list (jury’s still out on which one of us it was). I’ll leave you in suspense until the ingredients list, but did provide a pretty good clue in the recipe name. Alas, even with our changes — intentional or unintentional — the meal was still a success!

Active time: 30 minutes (more if you’re peeling and cutting the squash like we did)
Total time: 1 hour, 10 minutes
Serves: 4

3 tablespoons olive oil, divided
1 small butternut squash (about 2 lb.), peeled and cut into 3/4-in. cubes (about 4 cups)
2 cups farro
1 teaspoon chopped fresh sage, plus more for garnish
4 cups unsalted chicken stock (this was too much liquid for our version of the recipe and we ended up spooning a lot out)
1/2 teaspoon freshly ground black pepper
1 teaspoon kosher salt (we used pink Himalayan)
1/2 pound sweet Italian sausage, casings removed (we used a mixture of ground sweet and hot — and two pounds)
1/3 cup heavy cream
1/2 cup (about 2 ounces) grated Parmesan, divided (we used shredded)

Preheat oven to 300 degrees Fahrenheit (I’ll say more later, but this wasn’t hot enough for ours)

Heat 1 tablespoons oil in a Dutch oven or wide, heavy pot with lid over medium-high heat.
Add the squash and cook, stirring occasionally until golden brown, about 5 minutes.
Transfer to a bowl and set aside.

Return squash to pot and add stock, salt, and pepper.
Bring to a simmer and cover, then transfer to oven.
Bake until farro is tender and liquid is mostly absorbed, about 40 minutes (we discovered at 40 minutes that the dish was barely hot and there was A LOT of liquid remaining so we increased the temperature to 400 degrees and cooked an additional 20 minutes)

Meanwhile, cook sausage in a large nonstick skillet over medium-high heat, breaking into small pieces with a wooden spoon until browned and cooked through, about 8 minutes.
Remove from heat and set aside.

Remove farro from oven and stir in cream and half the cheese.
Serve topped with sausage (we ended up stirring this in because we had such a large amount) and remaining cheese.
Garnish with sage. 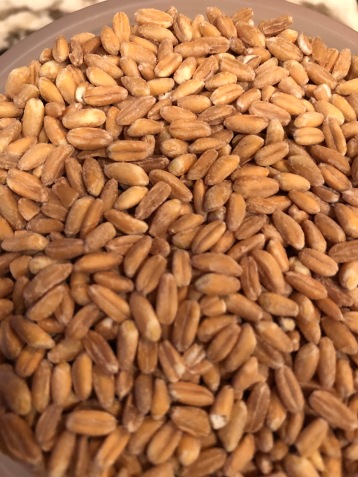 Would love to hear if you try either of these recipes — or please share some of your favorites in the comments. Bon appetite!

nicjoy.me View all posts by Nicole

2 comments on “this week in our kitchen: risotto + farro”