what I’m loving this week: a minimalized beauty routine (and the products that make is so)

By Nicole in minimalism, What I'm Loving This Week on September 9, 2017
One comment

As of recent, and mentioned in previous blog posts, the theme in our household is minimizing and simplifying — both as it pertains to stuff, as well as routines. Even before my fiance (!) came along, simplification had been an intention of mine for about the past year or so and was put into the forefront more so when I changed jobs and adopted a longer commute (yes, I promise one day I’ll get over this — just not yet). However, combining my loose goal of having less stuff with his newfound learnings about minimalism, the effort has really ramped up.

I’m a firm believer that minimalism and simplification are in the eye of the beholder. I don’t have one method that I’ve really adopted, but have instead taken bits and pieces from books and techniques I’ve discovered. I will fully admit there is about a 101% chance I will never be a full-fledged minimalist as it is defined by, well, “minimalists,” but I’m doing my best to remove from my life objects (e.g., clothes, books) that are not serving me or adding to my happiness (sort of along the lines of Marie Kondo’s logic of “does it bring you joy?”). And, as mentioned previously, the whole process has taken more than a year, but I feel as of late that I’m actually getting to a place of comfort with the stuff I’ve allowed to stay.

Beyond that stuff, part of my simplification quest is around a daily “beauty” routine. For those who know me well, you know I don’t wear a ton of makeup and a good day is one when I actually blow dry my hair (I can probably count on one hand the times this has occurred in the past year), so I already had a pretty simple routine in place. However, what I did find was that I had many products — most of them unused — many of which had been acquired during my hunt for the best of <fill in the blank>. At this point though, I feel pretty good with where

At this point though, I feel pretty good with where things are for my daily routine so I thought I would share in the chance that maybe one of you are looking for a tried-and-tested <fill in the blank>. Plus, I always find those “what’s in her purse” listicles fascinating, but my purse literally contains a wallet, cell phone, keys and a pen so I’m certain I would fail to interest anyone with that article. 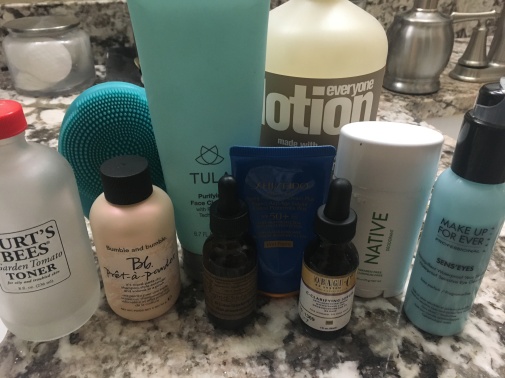 Puttin’ my face on: 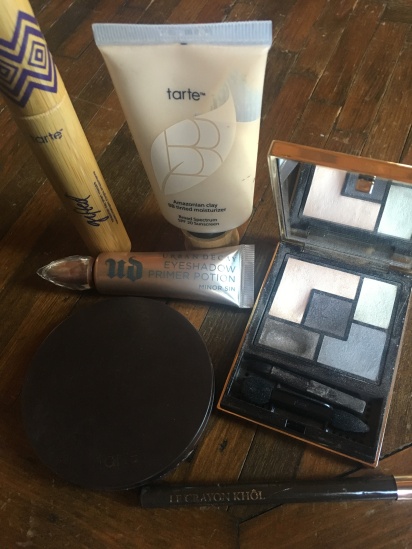 What about you? Any products you can’t live without or have helped you simplify your routine? I’d love to hear about it in the comments!

1 comments on “what I’m loving this week: a minimalized beauty routine (and the products that make is so)”